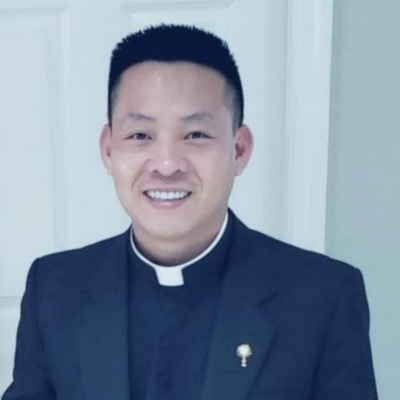 As a new Administrator of St. Oscar Romero Parish, I would like to introduce myself to you all.

I am Father Johnny Dang, a priest from the Diocese of San Bernardino. I was born and raised from a family of six children. I am the second oldest. I have one older brother, two younger brothers and two younger sisters.

I immigrated to the United States with my entire family in 1999. We settled in San Diego, California since then until now.

I was ordained a Deacon in December 19, 2014 and then a Priest in May 29, 2015. After I was ordained a priest, I was assigned to different parishes, such as St. Francis of Assisi in La Quinta, St. Catherine of Alexandria in Temecula, St. Patrick in Moreno Valley and now is St. Oscar Romero in Eastvale.

Although my assignment to St. Oscar Romero temporarily just for one year. I am looking forward to get to know you all and to work with you to build our parish community in proclaiming the Good News and celebrating the Sacraments. My hope is that St. Oscar Romero will grow in number, in faith and in the Love of Christ Jesus.

May our Good Lord Jesus bless us all,
Father Johnny Dang

About Us
SUPPORT US
Contact US
Bulletin
Parish Registration